Celebrated on May 10th 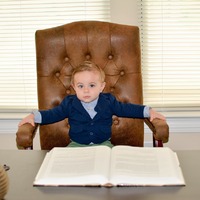 Can you draw what your business will sell?

Did you know: Every major company was once a small business. Consider the garage days for the founders of Microsoft and Apple. "You need a lot of passion for what you're doing because it's so hard," Steve Jobs once said. "Without passion, any rational person would give up."

Can you draw a business that no one has thought of as yet?

Did you know: Sebastian Martinez, 5, Are You Kidding At 7 years old, Martinez has already spent two years working on his company, Are You Kidding, which sells specialty socks. "We have been able to already reach the $15,000 that we made last year and are on track to double and hopefully triple our sales this year," his mother Rachel Martinez (the company president) told CNBC. Robert Nay, 14, Naygames.com Nay's first iPhone game, Bubble Ball, required him to write 4,000 lines of code and was downloaded more than two million times within two weeks of its launch. The game knocked the monster hit ''Angry Birds'' out of the number 1 most downloaded free game spot in the Apple app store. His startup costs: $1,200 form his parents to buy a new Macbook and software licenses.

Can you draw something you love to do?

Did you know: It’s important that your child is passionate about what he or she is doing. You want them to enjoy the experience and not lose interest and be back on the couch by the end of June. If your child doesn’t already have a specific business idea in mind, have them make a list of their favorite things to do. If they love animals, they could start a pet-walking or pet-sitting business. Maybe they want to make candles and sell them on Etsy. They could hold an acting workshop for younger kids in the neighborhood, teach music lessons or even design a mobile app.