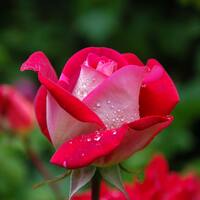 Can you draw a really old rose?

Did you know: The world’s oldest living rose is believed to be 1,000 years old. It grows on the wall of the Cathedral of Hildesheim in Germany and its presence is documented since A.D. 815. According to the legend, the rosebush symbolizes the prosperity of the city of Hildesheim; as long as it flourishes, Hildesheim will not decline. In 1945 allied bombers destroyed the cathedral, yet the bush survived. Its roots remained intact beneath the debris, and soon the bush was growing strong again.

Can you draw a rose with only five petals?

Did you know: The flowers of most species of rose have five petals except for the species ‘Rosa sericea‘ which has only four. Large number of petals is a result of mutation and it can be seen in cultivated roses. The cultivation of roses most likely began in Asia around 5000 years ago. There are approximately 13,000 identifiable varieties of roses throughout the world.

Can you draw a tall rose?

Did you know: The tallest rose bush ever recorded stood at an incredible 23 feet tall. After a fossil of a rose was discovered in Colorado, archaeologists determined roses have existed for more than 35 million years.