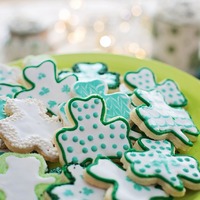 Can you draw a blue shamrock?

Did you know: Every March 17, countries around the world celebrate St. Patrick’s Day in observance of the death of St. Patrick, the patron saint of Ireland credited for bringing Christianity to the country. Initially a religious feast day in the 17th century, St. Patrick’s Day has evolved into a day of celebrating Irish culture with parades, music, dancing, special foods, and of course, a lot of green. Saint Patrick didn’t wear green. His color was “Saint Patrick’s blue.” The color green became associated with St. Patrick’s Day after it was linked to the Irish independence movement in the late 18th century. According to Irish legend, Saint Patrick used the shamrock as a metaphor for the Holy Trinity when he was first introducing Christianity to Ireland.

Can you draw a pot of gold at the end of the rainbow?

Did you know: Are you wearing green? I hope you’re wearing green. Do you see any leprechauns? What about pots of gold? Don’t be fooled by any holiday decorations showing lady leprechauns. In traditional Irish folk tales, there are no female leprechauns. If, by chance, one did happen to find a mystical pot at the end of a rainbow this St. Patrick’s Day, and it contained 1,000 gold coins weighing one ounce each, WalletHub estimates the total current worth at $1.26 million.