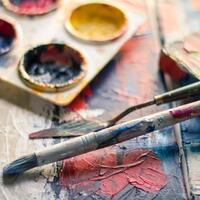 Can you draw exact same thing with a friend, then discuss how your drawings are similar (and different)?

Did you know: The arts teach children that problems can have more than one solution.  The arts celebrate multiple perspectives and teaches kids that there are many ways to interpret the world. Learning to draw and think creatively helps prepare students for the future! 51 Benefits of art education for kids

Can you draw a pair of lips?

Did you know: Painting the Mona Lisa’s lips took Leonardo da Vinci 12 years! Only the lips! Imagination and critical thinking are developed through art. Everyone is born creative. Some just need more practice to find their creativity. 51 Benefits of art education for kids

Can you draw a pencil... and let that be the beginning of your journey in art?

Did you know: Picasso could draw before he could walk, and his first word was the Spanish word for pencil. This is a cool fact about Picasso! We have to trust Picasso’s mother on this one. The Spanish for pencil was lápiz. This was Picasso’s first word and he was pronouncing it like “piz, piz”. The rest is history, and already when he was 13, Picasso’s father (being a painter himself) saw his drawing of a pigeon and concluded that his son had surpassed him. In the top 25 of most expensive paintings, 5 are by Picasso! 51 Benefits of art education for kids